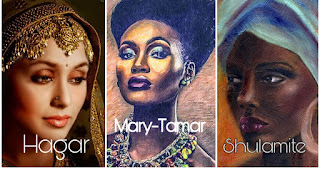 It was a special Sabbath with all the family away from home. I had time to reflect on my journey in the Royal household and so far, it has been part of my precious memories. I have the chance to do what I love and be with the man I truly love. The King has brought out the best in me and I feel so special around him. It is a delight to see my sister Mary and Nakai love my presence and my beauty is adored by the King. After Sabbath Mary sent me a picture of the three queens of King Kofi and it was beautiful because it looked exactly like us. Mary is always a good creative.

Sabbath was really my day because my husband told me to take a walk with him so I took Charo and Chaka with me. I couldn't find my winter jacket so Mary gave me hers. Bless her...
We walked together and went to sit inside an old Cathedral. The King started singing for me one of my favourite songs by Boys to Men-Till the end of the road. It was such an amazing moment as Charo was clinging to her dad too. I just love this man. The true King of the Black Monarchy.

We sat together to have a chat and I asked him one question I have been thinking of..."Why have you married 3 women"? Then I showed him the picture of all three of us Mary had compiled.

He gave me the reason it was deep but I took it in every word. And his reason made me love him the more and gave me a clearer understanding of the time we are leaving.


As the rebuild of Isreal is ongoing and the Black Monarchy is being instated, the King could only enlarge his territories with what he calls "The 3 Most Powerful Women On Earth."

Mary The Queen for Ophir, the descendant of the queen of Sheba. Queen of Sheba brought all the worth of Ophir to the forefathers of my King Kofi. King Solomon had all the gold and worth from Zimbabwe and that changed history forever.

King Kofi tells me that he can't build the nation again without Mary his Queen in whom he is well-pleased. Mary has lived by her promise and she will always have a special place in his life. Without Mary, he wouldn't be where he is and will cherish her forever.

He said I am an Israelite lady. Pure and beautiful. I am from the gateway to Africa(Ghana). The King chose me to be a maiden to Mary and also to serve him to rebuild the Black Monarchy. He explained to me why after conquering of Ghana, all black race went into captivity. He mentioned that the British captured the Israelites to build their country. "The true Royal blood has always been from Ghana hence that's why Commonwealth is still stronger today. He told me I am very special for the rebuild of the Black Monarchy. It was really an insightful moment for me. His wisdom reminds me of the greatest king who was lived.

And Hagar the Asian queen. As from the descendant of Ishmael, a nation blessed by the God of Isreal to have all riches after they were cast out, the King believes that they need to return back the worth which belongs to him and grandpa Isaac. All riches of today is in the hands of the Asians, I need to marry the queen of Asia to reclaim back the pride of Isreal

The 400 years Captivity is over and the queens from these mighty nations are happily helping the King rebuild and reclaim back the pride of his heritage.

I and my house serve one true King.

I am Shulamite this is my pride
Posted by Shulamite at 5:20 PM